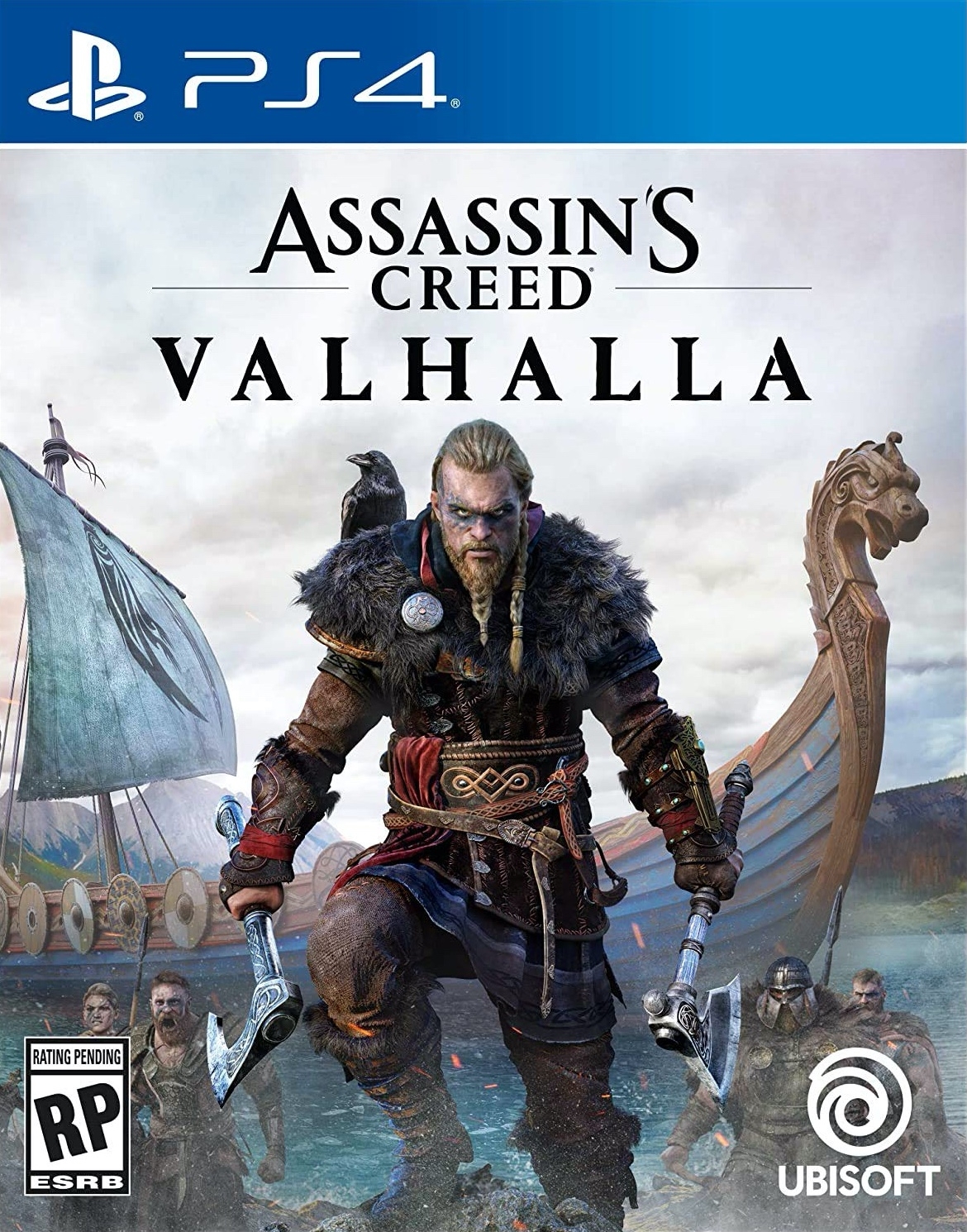 Become Eivor, a mighty Viking raider and lead your clan from the harsh shores of Norway to a new home amid the lush farmlands of ninth-century England. Explore a beautiful, mysterious open world where you'll face brutal enemies, raid fortresses, build your clan's new settlement, and forge alliances to win glory and earn a place in Valhalla.

England in the age of the Vikings is a fractured nation of petty lords and warring kingdoms. Beneath the chaos lies a rich and untamed land waiting for a new conqueror. Will it be you?

LEAD EPIC RAIDS
Lead your people in massive assaults against Saxon armies and fortresses, and expand your influence far beyond your settlement's borders. Command a crew of raiders and launch lightning-fast surprise attacks from your longship to claim your enemies' riches for your clan.

VISCERAL COMBAT
Unleash the ruthless fighting style of a Viking warrior and dual-wield axes, swords, or even shields against fierce, relentless foes. Choose your tactics and dismember opponents in close-quarters combat, riddle them with arrows, or assassinate them with your hidden blade.

WRITE YOUR VIKING SAGA
The advanced RPG mechanics of Assassin's Creed Valhalla give you new ways to grow as a warrior and a leader. Influence the world around you while acquiring new skills and gear to suit your playstyle. Blaze your own path across England by fighting brutal battles and leading fiery raids, or form strategic alliances and triumph by your wits. Every choice you make in combat and conversation is another step on the path to greatness.

GROW YOUR SETTLEMENT
Grow and customize your own settlement by recruiting new clan members and building upgradable structures. Get better troops by constructing a barracks, improve your weapons at the blacksmith, discover new customization options with a tattoo parlor, and much more.

SHARE YOUR CUSTOM RAIDER
Create and customize your own mercenary Vikings to share online, and reap the spoils when they fight alongside your friends in their own sagas. Recruit mercenaries created by other players, and add their strength to your forces.

A DARK AGE OPEN WORLD
Sail across the icy North Sea to discover and conquer the broken kingdoms of England. Immerse yourself in activities like hunting, fishing, dice, and drinking games, or engage in traditional Norse competitions like flyting or, as it's better known, verbally devastating rivals through the art of the Viking rap battle.
Players: 1
Co-op: No
Genre: Action, Role-Playing
Released: 17 Nov 2020
Developer: Ubisoft Montreal
Publisher: Ubisoft
Game information provided by TheGamesDB

While the release date already leaked yesterday, we’ve got official confirmation now that Valhalla is due to launch this November.

Assassin’s Creed Valhalla is due to launch for PS4, Xbox One, PC (on both the Epic Games Store and UPlay+), and Google Stadia. It was also confirmed that Valhalla will be a launch title for Xbox Series X and PS5, and that players who purchase the game for current-gen consoles will be able to redeem next-gen copies for free.

Legion said:
I will not be buying another Assassin's Creed game. I found this to be an absolute borefest!!!
Click to expand...

I have struggled with the Assassin's Creed games since they changed to RPGs. Didn't manage to finish either Origins or Odyssey, got bored too quickly. Origins was completely meh and the sailing around in Odyssey just got boring.

Then all the reviews for this were saying it's too long and dull.

Maybe I'll pick it up when it's dirt cheap but I've learnt my lesson paying launch prices for an Assassin's Creed gme. They'll need to do something amazing to get me next time.
Comment

I just started playing this and like it so far although it has the usual drawbacks.

Was it a mistake taking the resources before heading to England?

None of the choices I made up to that point seemed to affect any outcomes, even when I said to kill your man's son they let him go anyway so I thought feck it.
Comment

There are 5 choices that kind of effect the ending. Not in a significant way but effect your relationship with Sigurd and the outcome of it by the end. The game doesn't tell you about them till the ending came. You only need 3 out of the 5 as far as I'm concerned, as I got one bad choice and still got a good outcome.

I will put them in spoilers if some want to spoil it to get the "good" cutscenes at the end, note that these have spoilers for some end game story events as well:

Where can you buy nickel ingots?

I read online you can buy them from your trader after you found one, but no joy.

It's a hard grind to get the settlement builds up. I find raiding is fun for a few rounds but gets a grind, similar to finding all the loot.

The raven, its the first AC game I have not really used it much, as Odin sight finds most things but is still pretty useless.
Comment

Assassin’s Creed Valhalla 1.1.2 Title Update is now live and Ubisoft has shared the patch notes of the update, revealing all the upcoming changes with this massive patch.

The Valhalla 1.1.2 Title Update will add three new abilities and six more skills to the game. Along with that, some serious bugs and glitches in various quests have been fixed. There will also be some improvements in the game’s UI system.

Assassin’s Creed Valhalla received its next big patch today, and it’ll add a plethora of new features to the game – including oft-requested Transmog support.

Assassin’s Creed Valhalla version 1.2.0 introduces gear transmog to the title at long last – meaning players will be able to make their gear look how you want, no matter what skills and buffs it has attached to it. In order to Transmog your gear, though, you’ll need to head to Ravensthorpe, chat to Gunnar (the blacksmith), and pay 50 silver per item you want to change.

As if this much-requested feature wasn’t enough, you’ll start seeing support for Valhalla’s upcoming Easter “Ostara” Festival once you download the patch, too.


The patch notes – which are certainly very in-depth – also detail a couple of other features coming to the title with this new update: a new “Close Camera” option allows you to hug the character model a bit closer (but will zoom out during combat), three new skills (Fearless Leaper, Raven’s Loot and Loot Food) and various bug fixes.

If you want a breakdown of those moves, here’s what Ubisoft has to say about them:
When it comes to the Ostara event, Ubisoft promises you’ll be able to engage with “unique side activities (such as egg hunts)” and earn “special rewards” for partaking in the seasonal quests.

Ostara runs from March 18 to April 8, and we’ll apparently hear more about all this in a couple of days’ time when it all properly kicks off.
Comment

Mine didn't just update with the patch, it re-installed the whole game - all 73.4GB of it!!!

PATCH SIZES AND DEPLOYMENT TIMING:
I've listed the changes below for those that don't want to visit another website.

We added Change Appearance aka Transmog to the game.

We added a close camera option to the game.
GAME IMPROVEMENTS

Ubisoft has delayed the release of the Wrath of the Druids expansion. Originally set to release this month, the expansion won’t be arriving in April.

The large Title Update 1.2.1 for Assassin’s Creed Vahalla has been released.

Today’s Title Update adds support for Wrath of the Druids, preparing the game for the expansion’s release on May 13.

New skills added include Cold Rage, Eye of the North, and Intense Rage. You can also expect various gameplay improvements, balancing, and issues addressed with Quests, World Events, and Side Activities.

You can read the full notes for the Title Update below.

Added support for Wrath of the Druids, preparing the game for the expansion release on May 13. (a separate download is required on release day.)