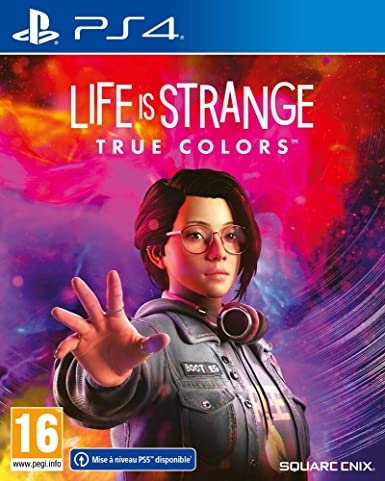 Life Is Strange 3: True Colors
Life Is Strange: True Colors is a graphic adventure played from a third-person view. The player can explore various locations in the fictional setting of Haven Springs and communicate with non-playable characters.

Alex Chen, a young Asian-American woman who has grown up in a foster family and has had a troubled childhood, reunites with her brother Gabe eight years later when he encourages her to return. After Gabe is killed in a mysterious accident, Alex investigates the truth behind the accident by using her psychic empathy power that allows her to read and manipulate the strong emotions, which she perceives as colorful auras, to physically see how others feel around her—potentially at the cost of being "infected" by their emotions. Along the way, Alex meets many citizens of Colorado's picturesque mountain town of Haven Springs, including two potential love interests, Ryan and Steph, the latter of whom appeared in Life Is Strange: Before the Storm.
Players: 1
Co-op: No
Genre: Adventure
Released: 10 Sep 2021
Developer: Deck Nine
Publisher: Square Enix

It's not another origin story apparently. Alex already has her powers when we first meet her and she has been suppressing them up until now.

It will be interesting to see a character already shaped by having this extraordinary ability. She's supposed to be the eldest LIS protagonist (early 20s) so the powers seem to develop in adolescence.

I also like that they brought back the detective /mystery element to the series as that gives it stakes.

I really need to start this series. Have yet to play any of the games.
Comment

A new trailer for Life is Strange: True Colors has been released by Square Enix and developer Deck Nine Games.

The new Life is Strange: True Colors trailer is called Welcome to Haven Springs. Narrated by the character Steph Gingrich, it basically introduces you to the town in which the game takes place.

Still on Chapter 1 but totally absorbed into this little town with already some tricky decisions to make. Quite proud of winning the jukebox game!

Also, the arcade games are quite addictive. Alex is such a well written and acted character, can't wait to get stuck into more.
Comment

Took me 2h 40mins to complete the first chapter. My plan is to play a chapter every day.
Comment

Life is Strange: True Colors’ Wavelength DLC is now available — well, as part of the Deluxe Upgrade, Deluxe Edition, or Ultimate Edition, that is. If you don’t have those versions of the game, you won’t be able to purchase Wavelength separately, unfortunately.

Wavelength is a prequel DLC that tells a story about Steph, a character who made her debut in the series in Life is Strange: Before the Storm. It follows her life a year before Alex moved to Haven Springs, where she passed the time playing records and hosting a radio show.
Comment
Share:
Facebook Twitter Reddit Pinterest Tumblr WhatsApp Email Link