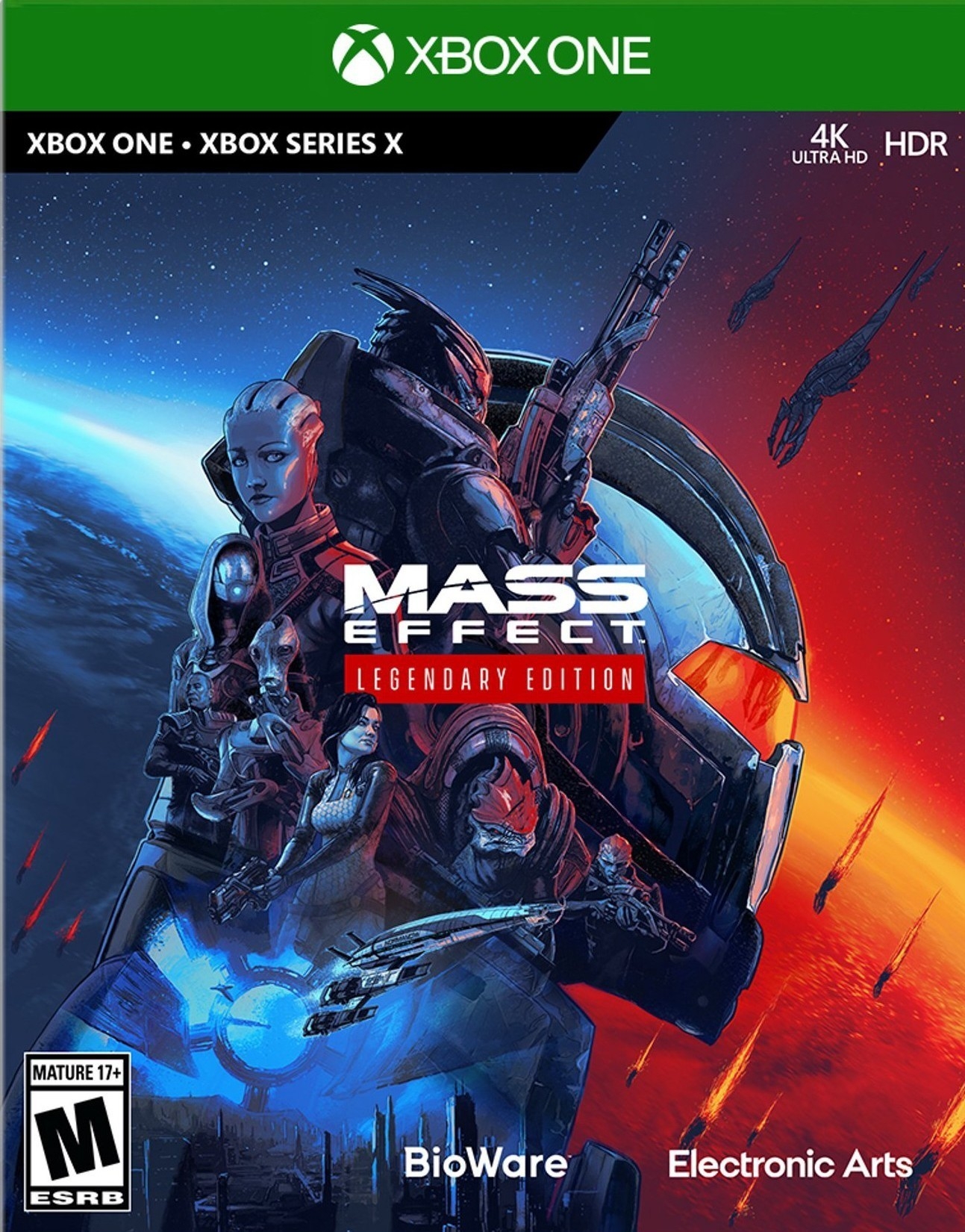 Mass Effect: Legendary Edition
One person is all that stands between humanity and the greatest threat it’s ever faced. Relive the legend of Commander Shepard in the highly acclaimed Mass Effect trilogy with the Mass Effect™ Legendary Edition. Includes single-player base content and over 40 DLC from Mass Effect, Mass Effect 2, and Mass Effect 3 games, including promo weapons, armors, and packs – remastered and optimized for 4K Ultra HD.

Experience an amazingly rich and detailed universe where your decisions have profound consequences on the action and the outcome.

RELIVE THE CINEMATIC SAGA: Heart-pounding action meets gripping interactive storytelling where you decide how your unique story unfolds.
Three Games – One Launcher: Play through the single-player base content and over 40 DLC from all three games, including promo weapons, armors, and packs.
Remastered for a New Generation: Experience the trilogy in 4K Ultra HD with enhanced performance, visuals, and graphics, all available in HDR.
Visual Improvements on All Three Games: Updates include enhanced models, shaders, FX, lighting, and depth of field.

EXPERIENCE THE LEGEND OF SHEPARD: Create and customize your own character, from appearance and skills to a personalized arsenal then lead your elite recon squad across a galaxy in turmoil.
New Shepard Customizations: With improved hair, makeup, eye color and skin tones you can create your Shepard in a unified character creator with all options available across the full trilogy, or choose to play as the iconic Femshep from Mass Effect 3 now available in all titles.
Gameplay Enhancements for the First Mass Effect™ Game: Enjoy improved aiming and weapons balance, SFX, input/controls, squad behavior, cover behavior, and gameplay cameras.

REFLECT ON YOUR CHOICES: Your choices seamlessly travel from one game to the next. Each decision you make will control the outcome of every mission, every relationship, every battle – and even the fate of the galaxy itself.
Performance Mode Options: Supports ultra-high refresh rates on PC, and offers a choice between "Favor Quality" for increased resolution or "Favor Framerate" to boost your FPS on consoles.

Bioware has announced the Mass Effect Legendary Edition, which is a remastered version of the Mass Effect trilogy. The studio also confirmed a new game in the series is in the works.

The Mass Effect Legendary Edition is probably one of the worst kept secrets in gaming at the moment, but it’s nice to have confirmation.

“For many months now, our team at BioWare has been hard at work updating the textures, shaders, models, effects, and technical features of three enormous games,” says the blog post. “Our goal was not to remake or reimagine the original games, but to modernize the experience so that fans and new players can experience the original work in its best possible form.

“It’s been amazing to see the adventures of Commander Shepard take on new life in super-sharp resolution, faster framerates, and beautiful visual enhancements. As game developers, we always hope that our games will transcend their original platforms. Having the opportunity to remaster the trilogy means that the fruits of a decade of our work will live on, and will be experienced better and clearer than ever before.”

Mass Effect Legendary Edition will include single-player content and DLC from Mass Effect, Mass Effect 2, and Mass Effect 3, plus promo weapons, armours, and packs all optimized for 4k Ultra HD.

It will be available in spring 2021 for Xbox One, PlayStation 4, and PC, with forwarding compatibility and targeted enhancements on Xbox Series X and PlayStation 5.

The next chapter of the Mass Effect universe is also in the early stages, and while Bioware wouldn’t say more on it, the studio said it is “looking forward” to sharing information on it in the future.

The game’s Steam page gives us some idea of what kind of hardware you need to run this.

The minimum specs for the game are an Intel i5 3570 or AMD FX-8350 CPU, while users need to have 8GB of RAM. On the graphics card front, players need a GTX 760 if they have Nvidia hardware and either an AMD 7970 or R9280X if they’re AMD people. You also need a minimum of 2GB of video memory.

The Mass Effect Legendary Edition team at BioWare has outlined details on what to expect in the remaster.

These outlined changes to the Mass Effect Legendary Edition include gameplay tuning, rebalancing, and more.

Alongside the aforementioned, you can expect additional gameplay improvements to all three titles, the Mako for Mass Effect, and Galaxy at War rebalancing for Mass Effect 3.


With combat tuning, BioWare said it wanted to make the experience better across the board, but not change what fans have come to love about the games.

In the first Mass Effect, accuracy, including reticle bloom and weapon sway, has been tuned across all weapons to allow players to maintain more consistent firepower while still managing their shots/overheat meter. The team also improved the aiming down sights camera view to be tighter on combat so that ADS is more accurate. BioWare also improved the aim assist to provide better precision.

Abilities have also been rebalanced in the first game. For example, the “Immunity” ability now grants a defensive buff that lasts a brief period of time instead of being a small buff that lasts indefinitely.

Below you will find an overview that lists gameplay changes made specifically to the first Mass Effect:
Additional gameplay improvements have also been made to encounters, enemies, and how you engage in combat. You can expect these to be more in line with the second and third games. One of these changes is the boss encounter on Noveria. The boss room has been slightly reworked, but still familiar although less cramped. You’ll also be much less prone to being thrown around by biotic abilities.

Other targeted combat updates include:
XP gained during the first game has also been rebalanced for better consistency, especially towards the end. Players who complete most of the game should be able to more reliably get to higher levels on a single playthrough. Additionally, there is no longer a level cap on a first playthrough.

As a final gunplay change, the teal also tweaked ammunition in Mass Effect 2. They said that they found ammo was “spawning too scarcely in the original game,” so they have increased the drop rate for ammo in ME2, particularly when using a sniper rifle.

The legendary M-35 Mako from the first Mass Effect has been “calibrated” to perform better than ever. In the original game, the physics tuning for the Mako made it feel too light and bouncy, but now it will be a smoother ride. Its functionality has also been improved with faster shield recharging and new thrusters will allow for a speed boost.

Here’s more on the changes you can expect when driving the Mako:
For the Legendary Edition, BioWare said its goal was to tune up the trilogy and make it more consistent. One of the things it did was to unify Shepard’s customization options in the character creator while also adding new options, like additional skin tones and hairstyles. You will be able to use the same character creator code across all three games, meaning your Shepard can now have a consistent appearance across the trilogy. You can also change the character’s appearance with each game if you like. You can also expect better character appearances with updated textures and hair models.

BioWare also added the Mass Effect: Genesis comics by Dark Horse into the base experience before Mass Effect 2 and 3 as an optional experience so players can make choices from previous games no matter where they choose to start.

You can also expect additional enhancements such as:
The Galaxy at War feature has also been rebalanced. For example, Galactic Readiness is no longer impacted by external factors not part of the collection, like multiplayer or the old companion app for Mass Effect 3.

The more content you complete across the entire trilogy, the more likely you’ll be “prepared for the final fights in its conclusion.” However, if you only play Mass Effect 3, you’ll have to do just about every option available in the game to be eligible for an ending that doesn’t result in massive galactic losses.

Playing the first two games and carrying over your progress is the most reliable way to get good results in the final hours of the Reaper War. The Extended Cut ending is also now the game’s default finale.

Along with all of these changes, you can also expect critical bug fixes and backend improvements made to the Paragon-Renegade system in Mass Effect 2. The team resolved some legacy issues that “inhibited accurate reputation stats” from being displayed and prevented certain dialogue options from being selectable. Because of this, key moments which were previously difficult to achieve in ME2, and subsequently impacted Mass Effect 3, can now be completed more reliably.
Comment

BioWare has released a comparison video showing off the differences between the original Mass Effect trilogy and the Mass Effect Legendary Edition.

In the comparison video, you get an in-depth look at the visual upgrades you’ll see when Mass Effect Legendary Edition releases next month.

Tom said:
BioWare has released a comparison video showing off the differences between the original Mass Effect trilogy and the Mass Effect Legendary Edition.
Click to expand...

I have to say, I'm not particularly sold on the graphics. Mass Effect never looked very good, so they seem more to have brought them up to the standard that should've been expected from a game at the time of release, rather than looking particularly modern.

Certainly a good time to play them for the first time though. Getting all the DLC bundled is worth the hassle on its own.
Comment

Had a quick go at Mass Effect 1, and the gun play feels a lot better than what I remember on the 360.

The graphics are nice and crisp and frame rate was excellent as well. You can see that is an older game, but the work they done it, is really very good.

I hope they bring this level of effort to the next Mass Effect game. The original trilogy is something special.
Comment

David76 commented
I went with legendary as I believe it will be easier to max out your character to get the most out of moving onto ME 2. The original game needed 2 playthroughs if I remember correctly to max out. Could be wrong but the new leveling system is designed for one playthrough per game.

Mass Effect 1 really feels old now even with the updates but my god is it good to be back. Renegade Femshep the Return
Comment

David76 commented
I usually go purely Paragon, better off picking one and sticking with it

Finished Mass Effect 1 last night, it's so bogged down with the mako and just the general jank. Narrative is decent if a little long winded sometimes.

I think that will be the one and only time I'll ever play through ME1. Especially since I see you can change class in the sequel.

What classes did people pick in the 2nd game? I want to depart from pure soldier and do some biotics but don't want to be super limited with guns.
Comment

Franco Pinion said:
What classes did people pick in the 2nd game? I want to depart from pure soldier and do some biotics but don't want to be super limited with guns.
Click to expand...